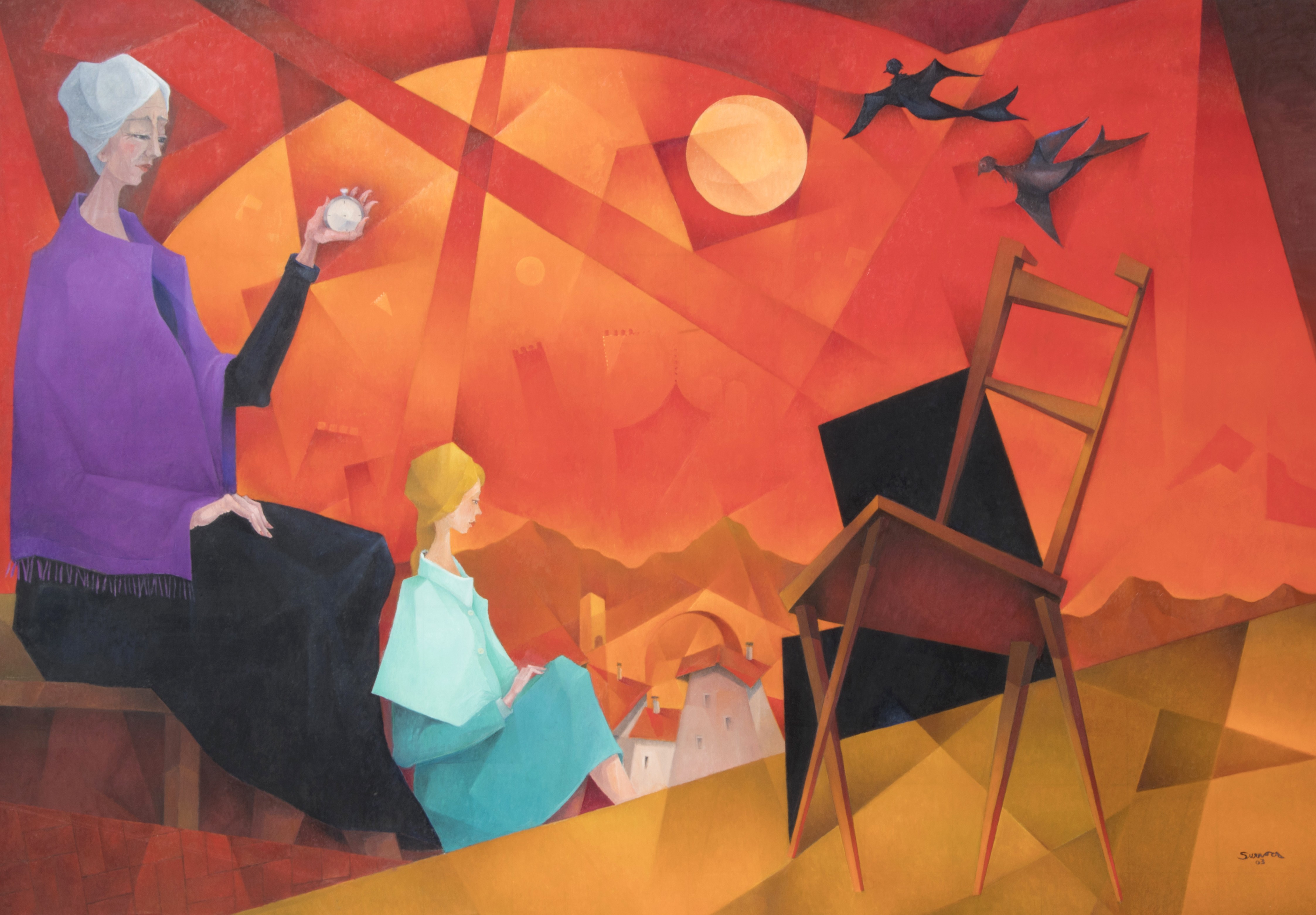 1922
His brother Anton was born.
He spent his childhood in Camprodon.
His childhood games were centred on painting.
Both dedicated themselves to the world of art and painting, always with their parents’ approval.

1936
18 July: beginning of the Spanish Civil War.
On 22 July he abandoned Camprodon, being contrary to the political situation.
He arrived in France, Prats de Molló. He was confined in a concentration camp in Montpellier, but for several circumstances, after a few days, he was able to take a train to Paris.
He began his exile in Paris.
He stayed in Saint Germain at a relative’s home, sculptor Joaquim Claret from Camprodon. He worked in his studio.
He met and made friendship with several painters, sculptors and poets. ...
He studied in depth the work of some impressionist artists he admired: Van Gogh, Cézanne, Seurat… without forgetting the classics.
He attended courses at   L’ Acadèmie de la Grande Chaumière

1939
End of the Spanish Civil War.
He returned to Camprodon and completed the Military service, first in Coruña and later in Leon.

1941
With the Military service completed he returned to Catalonia, to Barcelona and started working at Frederic Mares’ studio (sculptor, teacher and director of the School of Fine Arts).
He collaborated in the creation of many works of art: to be outlined the moulding of General Prim’s sculpture, presently located at the Ciutadella Park in Barcelona and the restoration of the Royal tombs at the Monastery of Santa Maria de Poblet (Tarragona).

1947
Death of his brother Anton at the age of 25. He was a painter and was preparing an exhibition Barcelona.

May: He won the 1st prize of the painting contest of the Real Círculo Artístico de Barcelona. With the prize money he bought painting tools, stopped working at Frederic Mares’ studio, abandoned sculpture and fully dedicated himself to painting.
He moved to Camprodon where he prepared his first exhibition in honour of his brother, who could not achieve his dream.

In May he participates in the collective exhibition Pro-Hospitals. He shows the work: Inside

In the beginning of fifties, Manel Surroca becomes adhered in Grup Lais.

This kind of group organized some collective exhibitions in different places:

Lleida:  Institut d’estudis Lleidatans (May). He showed the same works as Bilbao.

The Grup Lais organized the “Saint Jorge award” in Shopping gallery “Laietanes” during May where Surroca showed some Works: Small Mill, The Cahin and Es Naretes

The provincial committee in favor of hospitals and charities sponsorship by Reial Cercle Artístic brought together nonprofessional artists to Painting & Sculpture Competition to contribute to the charitable raffle in Barcelona. It was exhibited from 10 to 22 of June in “Sala de festes”.

In May-June he exhibited in Mallorca in “Sapi Galerias de Arte” in the exhibition of Panorama of contemporary painting and sculpture. The title of Manel Surroca works was: ¿me?

In August he shows two works in the Ripoll’s “Casino” together with some members of Grup Lais.

In November he made his second individual exhibition in Sale Busquets of Barcelona. There, he showed twenty-five works.

Also, he took part of first painting exhibition of Victoria Seix award and one of his works was selected to be award. At the end, it was not possible.

In December he take part of Christmas contest. His work was valued of originality.

In 1950 Manel Surroca married with Concepció Carbó, “La Conxita” and his best man was the sculptor, Frederic Marès.

﻿1951
End of group Lais.
Teacher at the School of Fine Arts and Trades in Barcelona.
Contest San Jorge: one of his works "Interior" was selected

He participated in the regional exhibition in Barcelona before I Biennial Hispano-Americana d’Art del Instituto de Cultura Hispánica, in the Museu d’Art Modern in Parc de la Ciutadella of. Barcelona. He showed “The inside” within the painting section. This work was selected for the I Biennial Hispano-Americana de Arte celebrated in the Exhibition palace of Retiro in Madrid.

1953
Contest San Jorge 1953 – he exhibited one of his remarkable works "La maternidad" (Maternity).
June: Collective exhibition at the Catalan Art Room at the Real Círculo Artístico in Barcelona, on the occasion of the 1st Spanish American congress for Economical cooperation. He exhibited "Mí taller (My Studio).

In October he celebrates an exhbition in Gaspar room of Barcelona.

In December he participates in the Painting and sculpture contest art exhibition of 1953, organized in the Cercle Artístic showing “The circus”.
Also, in December: He participated together with other Spanish painters at the Paris “Free Art” exhibition.

In September he participates in XV Exposition de Belles Arts of Badalona.

In the autumn he participates in the collective exhibition together with members of Cercle.

In October he submits an entry to a special competition of painting and sculpture organized by Cercle Artístic of Barcelona in the Museum of Modern Art.

He returned to Camprodon, continued with the family business, shoe shop: "Can Gona”. He used the back room to continue painting.

He participates in the competition “Grand Prix of Saint Jorge” showing  “Still life”.

1960
He makes the monolith dedicated to Isaac Albéniz (1860-1909) in celebration of the centenary of his birth in Camprodon.

In January, he organizes an exhibition of his personal art gallery. One of the drawings showed was a drawing awarded in 1948.

Joan Ponç (1928-1984) moved to live near Camprodon, visited him very often and helped him to reaffirm himself with his painting. Surroca recognised his influence in a certain period of his life.

He painted a painting about musical theme and it was reproduced as base of poster VIII Festival de Música Isaac Albéniz.

Project of a painting of large dimensions for the apse of Santa Maria Church in Camprodon.

He paints "Benvinguda"(Welcome).At present this painting is localted in the principal entrance of public school Dr. Robert in Camprodon.

In CEIP Dr. Robert de Camprodon was celebrated Un dia amb Surroca i Mompou (A day with Surroca and Mompou). A ceremony with members of Parliament, music and images of his work.

2003
He paints “Les edats de la vida" (The ages of life), where symbolism appears. It is localted at Camprodon’s geriatric hospital.

Inauguration of the stained glass window over the Baptistery of Santa María Church in Camprodon, following the project he had left.